The alleged inconsistency in the academic qualifications of the presidential candidate of the ruling All Progressives Congress, Bola Tinubu, which he filed with the Independent National Electoral Commission, INEC, ahead of the 2023 presidential election is presently threatening his presidential ambition, Starnews Nigeria has gathered.

THE WHISTLER reported on Friday evening that Tinubu’s 2022 educational qualification claims, in his documents which he filed with INEC contradict the 1999 and 2003 claims that he filed with the electoral umpire.

In his filings with INEC during the 1999 and 2003 governorship elections, Tinubu listed St Paul Children’s Home School, Ibadan, (1958 to 1964) and Government College, Ibadan, (1965 to 1968) as primary and secondary schools he attended, without a sworn affidavit.

A sworn affidavit is only attached to accompanying documents in the event a candidate fails to state his qualification as provided if that’s compulsory.

In his 2022 filing, Tinubu failed to indicate as he did in both 1999 and 2003 that he attended both primary and secondary schools. He rather left it blank, raising fresh question marks.

Similarly, he contradicted his earlier claims in 1999 and 2003 that he only graduated from Chicago State University.

In his 2022 filings, he claimed to have obtained two separate degrees from the two American universities – the Chicago State University and the University of Chicago.

Tinubu however failed to state in the 2022 filing which university he exactly obtained a degree from, which he earlier claimed was “Business and Administration in 1979.”

He further claimed by records of his filing with INEC that his school certificates were all stolen by unknown soldiers during the military junta of the 1990s, the period he went into exile and attested to an affidavit to support these claims.

In his affidavit of claims attached to his 2022 documents, Tinubu wrote, “I went on self-exile from October 1994 to October 1998. When I returned, I discovered that all my property, including all the documents relating to my qualifications and my certificates in respect of paragraph three above, were looted by unknown persons.

“My house was a target of series of searches by various security agents from the time the Senate of the Federal Republic of Nigeria was forced to adjourn following the military takeover of the government of 17th November 1993.

“I was the chairman of the Senate committee on appropriation, banking and finance. I was also a plaintiff in one of the two suits against the interim national government in 1993.

“I went on exile when it became clear to me that my life was in danger,” Mr Tinubu said in his claim.

THE WHISTLER recalls that Tinubu’s earlier education filing with INEC revealed that he proceeded to Richard Daley College, Chicago, from 1969 to 1971 from Ibadan.

He stated in the former filing that he attended the University of Chicago instead of the Chicago State University.

Meanwhile, the Chicago State University had confirmed his studentship, and that he also graduated with a degree in Business and Administration on June 22, 1979.

Recall that the inquiries made to the University of Chicago turned out false and were the basis for the institution of a suit by the late Human Rights Lawyer, Gani Fawehinmi.

Although, Fawehinmi, who died in 2009, had argued the matter up to the Supreme Court, which dismissed the case on technical grounds that Tinubu enjoyed immunity and so could not be subjected to such a trial, the merits of the case were not looked at, posing continues question mark about the two-term governor’s claims.

Tinubu has never spoken in defence or support of his education claims.

THE WHISTLER said it contacted Tunde Rahman, the spokesman for Tinubu, but he has yet to respond to our text message inquiries as of the time of filing this report. 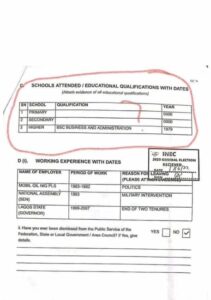 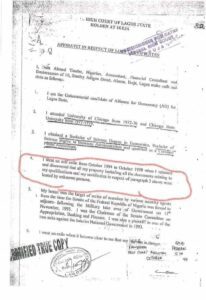