*Urges Ondo women to vote Atiku as next president of Nigeria

Mrs Titi Atiku, wife of Alhaji Atiku Abubakar, the presidential candidate of the People’s Democratic Party (PDP), on Friday, stormed Ondo South Senatorial District of Ondo State with her campaign train, to mobilise large group of women in support of her husband presidential ambition, ahead of February general election in Nigeria. 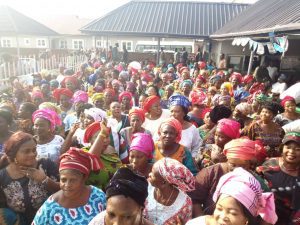 Mrs Titi was received at exactly 5 :30 P.M by group of women and party leaders who converged across the six Local Governments of Ondo South at Domfav Hotel and Suites in Okitipupa Local Government of the state, amidst fanfare, singing and dancing by the women who trooped out in multitudes to give her a rousing welcome.
The venue of the meeting was filled to capacity by the women who were waving their Permanent Voters Card (PVC) as Mrs Atiku, in company of Senator Bent Grace of Adamawa South, were unshered to the podium alongside other ectorages that followed her.
Mrs Atiku urged the cheering crowd to vote for her husband, Atiku Abubakar, to ameliorate the hardships unleashed on Nigerians by the ruling All Progressives Congress (APC) administration led by President Muhammadu Buhari.
According to her, “a vote for Atiku is a vote for employment, restructuring, bettter economy, security, wealth creation, patriotism, and good governance.”
She accused the APC’s administration of planning to rig the 2019 presidential election following their desperation to remain in power at all cost.
She thereafter presented the Senatorial Candidate of PDP in Ondo South, Otunba Nicholas Tofowomo to the women. She urged them to vote massively for Tofowomo as their next senator with other PDP candidates in Ondo South.

Speaking on behalf of the PDP, Chief Eddy Olafeso, South-West Vice-Chairman of the party, urged the people to defend their votes as he accused the ruling APC in conjunction with the Idependent National Electoral Commission (INEC) as being desperate to rig the presidential election against the PDP.

He asked Mrs Atiku to consider Ondo South for important political positions when her husband and presidential candidate of the party, eventually emerge the next president of Nigeria in February 2019 general election.