Skip to content
You are here:Home-News-2019: Ekweremadu Concludes Plans To Dump PDP For APC

Ekweremadu is seriously involved with high-level negotiations with the top echelon of the APC, “because he was aggrieved about the way he has been treated since Senate President Dr Bukola Saraki defected to the PDP. 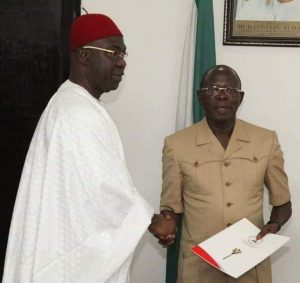 Recall that Starnews reported earlier today that Ekweremadu said he was still in the PDP but his statement was doubful, as he netheir promise to remain in PDP nor did he deny his plans to leave the PDP for APC.

In the statement he issued on Facebook, he only appreciated all his friends, loyalists and associates for their concerns, leaving the suspense whether he will eventually leave or not.

His planned defection may not be unconnected with the choice of Peter Obi as Atiku Abubakar running mate as the PDP presidential candidates.

Sunnews had two days ago quoted a source who said “Ekweremadu was not happy with the party (PDP) as he claimed that he was used and dumped by the PDP.”

Starnews gathered that Ekweremadu’s defection “will take place in a matter of days.”

Meanwhile the PDP has spoken through its Organising Secretary, Col. Austin Akobundu (retd), that there is nothing missing that Ekweremadu will be looking for in the APC as he claimed that even those who erroneously joined the APC from the area are now full of regrets with some of them even contemplating a return.